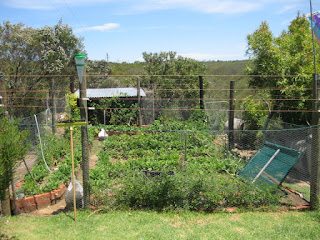 This vegetable garden has been electrically fenced using solar power. The electric pylon on this property (The Crags, WC.) has been cut off due the amount of wildlife that was killed on it (primates, birds, caracal etc.).

Electric fencing or employing baboon monitors are two highly effective long term deterrents for farmers to use.  Alternative Feeding Sites are successful too when carried out in the correct manner whereby the primates do not associate the feeding station with humans and the food is distributed in a manner which does not encourage population growth and increased inter-group stress. (Contact us for more info on this at: primates.south.africa@gmail.com)

Sadly, the amount of farmers who consider electric fencing to be "too expensive" - those who do not include this in their budget for making a profit while exploiting the environment, do not value the environment, biodiversity and the future enough to pay the relatively small amount required for an electric fence.

Such self interest only serves to degrade the environment further. Ironically, many of these farmers also argue that shooting primates  is their most used method for deterring them from crops.

Shooting has never stopped primates from raiding, making this so called solution a highly irrational one.

All that shooting achieves is further destruction of the environment.

DETERRING BABOONS FROM YOUR PROPERTY - LINK

DETERRING PRIMATES WITH A GORILLA SUIT - BELOW: 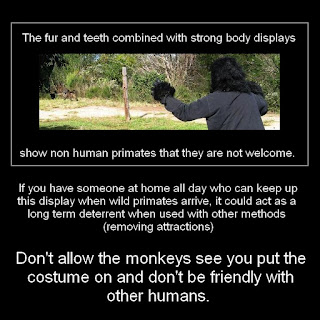