Kennedy - one of our sub-adult orphans - left his troop two months ago to find a new one. Thankfully, he'd moved off in the direction of the gorge which is a wild area uninhabited by humans. Gun toting residents who illegally shoot primates are common in this area according to local eye witnesses and we didn't want Kennedy to head off towards human danger. He arrived back home today to be healed after being wounded in a male on male fight. 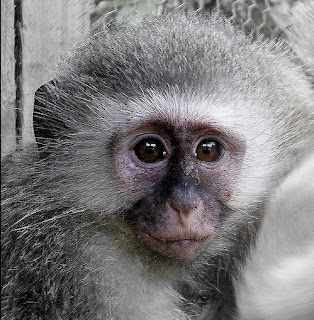 Kennedy as a juvenile. 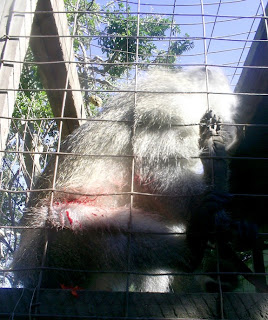 Kennedy healing at home after a male on male fight.


The Perspective of the "Single" Male:

Residents who come across single male baboons or monkeys on their property often mistake then to be "rogue" males. Instead, most of the time, these males are young teenagers who may have left their troops to find a new one for the very first time. Males generally leave their troops to find new troops about five times in their lives. These single males are correctly termed "transient" or "dispersing" males.

One mistake we make, when understanding the way in which we contribute to the dysfunction of healthy troop structures is to assume that only the physical impact matters. To ignore the complex psychological components necessary for wild primate species that are based on social relationships, is to deny a crucial element that is integral to a healthy bio-diversity.

Pubescent primate males dispersing into new troops do not only face a temporary time of physical challenge but also one of psychological challenge; for pubescent males, these necessary lessons bring a physical and psychological strength that is not only needed for the individual but the whole troop in the future.

These young males, having left the protection and guidance of their birth group are tested for the first time in many ways. Without the protection of the group, they are exposed to predators and other difficult elements of the wilderness. Not only are they at risk from predators but their new troop is likely to be hostile until the individual has formed bonds – this can take a few months.


Sometimes these males are not accepted at all.

With all the added unnatural risks these males face due to human intervention, they sometimes ironically seek protection in human areas where they have been led to believe they may find it due to humans feeding them by hand.

If you consider those monkey troops that have apparently been wiped out in The Crags area (as residents views suggest), this means that dispersing male monkeys are forced to wander abnormally far distances to find another troop, hence risks are increased. These males therefore find themselves trying to survive in unknown territories with strange predators and the challenge of finding new food sources that they had previously relied on the troop to help them with. Sometimes, when life gets this tough for the male that has been forced to wander unnaturally long distances, he will seek protection in human areas, deluded by the fact that humans are friendly when they invite these animals in by feeding them.


Human areas full of abundant unnatural food sources that also have a scarcity of threatening predators are an obvious attraction for wild primates suffering undue risks. But as these primates have a strong understanding of territorial boundaries, it is the mixed messages that humans themselves give that allow these species to assume they are welcome.

In the Cape Peninsula, dispersing male baboons are unable to reach new troops as development has cut them off from doing so.

Dispersing males are alone; without grooming partners that contribute to their physical and mental health that generally keep parasite infestation at bay.

Robert Sapolsky – primatologist and neurologist - observed that during this period, the accumulated stress in transient males contributes to parasite infestation as the immune system becomes relatively weak. Once the individual joins a group, his health balances out again.

This once again illustrates how fragile a period this is for dispersing males.

As the male is left without troop guidance, he may resort to the temptation of new food sources and enter onto human properties where he will at first be respectful of the territorial boundaries but once invited in, will push those boundaries and attempt to raid.

Puberty is a time of exploration and learning for these young males who have yet to grasp the full maturity needed when adult. As sub-adults, they are also more likely to be naïve about the dangers humans present.


Residents need to practice consistency in their approach to demonstrate that it is unacceptable for wild primates to enter their properties. It also helps to have baboon/monkey proof homes and to ensure that no attractions – especially garbage – are on display.


In time, with the resident’s patience, tolerance and understanding, the transient male will move on into his new group and if he has learnt worthwhile lessons (not to push territorial boundaries) from his human neighbors, he will carry these lessons with him. In this way residents can contribute to the future of healthy monkey and baboon troops.