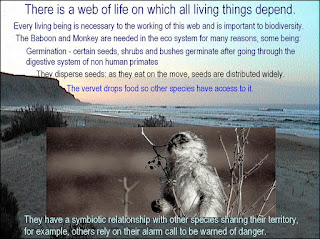 OBSTACLES TO THE REHABILITATION OF VERVET MONKEYS AND CHACMA BABOONS BACK INTO THE WILD:


- Popular misconceptions about the baboon and monkey that are perpetuated by inadequate and contradictory legislation.

- Ambiguous messages conveyed to the public due to loopholes in legislation.

- Policy that does not allow these species to be released  beyond an arbitrary and scientifically flawed limit of 100km radius of  rehabilitation centres in the WC. This pointless limitation makes finding safe, appropriate release sites almost impossible in the Western Cape and impacts adversely on animal welfare.

- Policy that treats provinces as mini-sovereign states, and rigidly prevents these species from being imported and exported between provinces. Taking the small amount of rescue and rehab centres in SA into consideration, this law places great limitations on the rehabilitation of these primates back into the wild.

- An alleged failure on the part of provincial conservation authorities to consider the relevance of  scientific papers that dispute the issue
of genetic pollution.
INADEQUATE LEGAL PROTECTION:

In my dealings with members of the public, I have found that the contradictory message conveyed  encourages the public to treat protection of wildlife as nonsensical, resulting in these laws being widely disobeyed.These  laws therefore directly impact on the large amount of vervet monkeys and baboons being shot, of orphans that result from this practice and of monkeys being illegally kept as pets.


POPULAR MISCONCEPTIONS:Popular prejudice against our wild primates is one of the most influential reasons for the manner in which the public treats them. These misconceptions need to be educated out of our culture, not perpetuated by problem animal control attitudes.

One example of a common misconception –Rabies:

Fears that Vervets are carriers of rabies or other infectious diseases that can be transmitted to humans are unfounded. Like us, vervets are primates – if they carried rabies, we would be carriers too. Any mammal is able to contract rabies though.

According to Monkey Helpline of EKZN, the state vet reported that no vervet monkey rabies case has ever been recorded.

INADEQUATE SPONSORSHIP OF REPUTABLE REHABILITATION CENTRES:Considering that conservation policies and public misconceptions directly impact on the
widespread abuse of these primate species, reputable sanctuaries and rehabilitation centres should perhaps be able to expect more support from the government in terms of sponsorship and a willingness to consider more protective legislation that is actively
enforced to ensure the work of these centres has the potential to progress in the best interests of the species and biodiversity.

This is far from the case. To date, we have found that a number of “awareness centres” or 'sanctuaries” with commercial agendas (whereby wild animals are allegedly traded, bred, petted by the public or worse, while the public is manipulated into believing these are reputable sanctuaries acting in the best interests of the animals, are the centres that are most likely to be financially viable.

In short, conservation policies are encouraging the proliferation of commercially exploitive 'wildlife centres' who have concluded that the most practical manner to run a
rescue centre is to exploit animals while simultaneously being seen to be “rescuing and rehabilitating” them.

This is far from being an ideal situation for the many orphaned and injured animals who need rescue and protection.

THE PRESENT REALITY:There are over 600 baboons awaiting rehabilitation and over 700 vervet monkeys at the two most established primate sanctuaries in South Africa. The backlog of orphans residing at these centres is an indication of how severe the problem is and indicates:

-the lack of safe, appropriate release sites available, and the failure of conservation services to pro-actively promote and assist with, troop releases.


SOLUTION:The best answer to this widespread problem would be for conservation authorities to adopt a far more supportive role towards rehab centres, and to take animal welfare far more seriously.  They should also remove onerous policy conditions, and promote uniform and protective legislation that is strongly enforced by them.

This solution would ensure that this species are no longer persecuted, seen to be worthless and less orphans and pets would be the result. The pressure on present rescue and rehabilitation centres would be lessened and full release back into the wild would become far more viable.
on January 11, 2012