Since 1997, Karin Saks has been involved in the fostering and rehabilitation of orphan baboons, the caring of injured monkeys who have been returned to the wild and has worked towards a harmonious co-existence between these primates and humans. She has monitored wild baboon troops who raid human homes to research ways of baboon management and has observed wild troops in her area with a view to finding out damage done to troop structures and numbers because of human intervention. 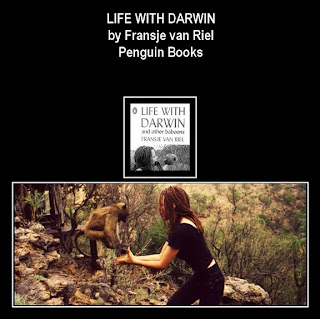 In 1998, while Karin was introducing her very first orphaned baby baboon back into the wild, she was accepted as surrogate mother into the troop and came as close as possible to understanding a glimpse of how it feels to be a mother baboon. As there were no humans to rely on for guidance, her only choice was to listen to the wild baboons to ensure her adopted baby baboon would have a secure, safe future. She learnt their language and acted on their direction. 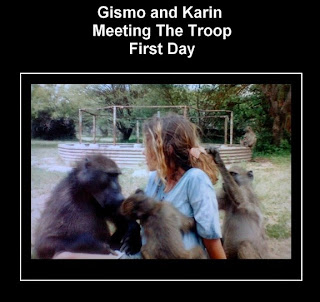 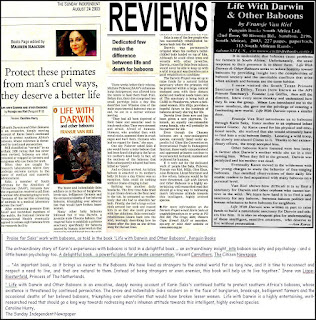 As a result of the incredible communication between the baboons and herself, the rehabilitation was successful.
This experience was deeply profound and became the turning point in her life. From that moment on, she decided to dedicate her time to helping wild primates and acting as a mediator between these animals and the humans who have difficulty co-existing with them.
Karin is currently based in Kwazulu Natal where she is observing the samango monkey (ssp. Cercopithecus labiatus) and chacma baboon (Papio ursinas). 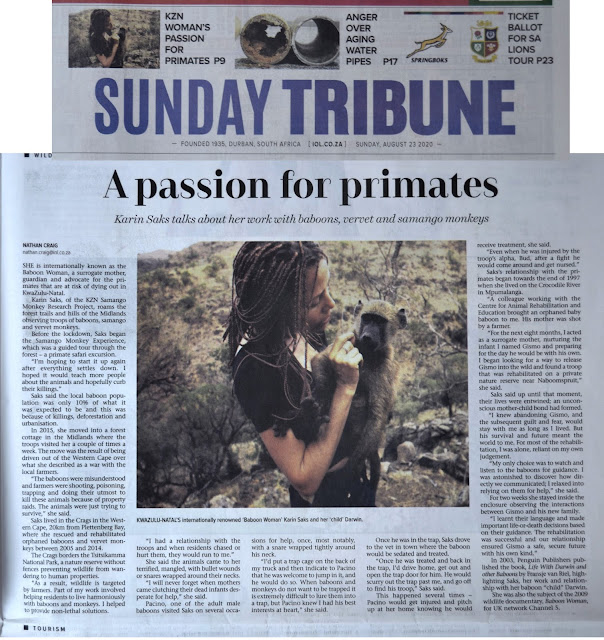 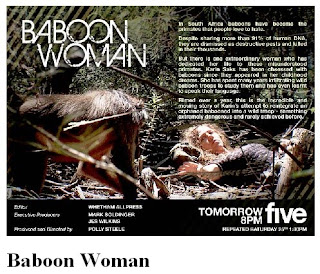 In November 2007, she participated in a documentary on her work with baboons, filmed by UK based company Firecracker Films. This was first screened in the U.K. in April 2009 and has since been screened in most of Europe, the USA, New Zealand and Australia.

Book: Life with Darwin and other Baboons by Fransje van Riel, Penguin Publishers and House of Books.

This book – written by Fransje van Riel – outlines Karin’s previous experience with the rehabilitation of orphaned baboons, illustrating her life shared with a number of wild troops as well.

“My mind’s forest had formed new paths, heading towards a profound new worldview. Near a small town called Naboomspruit in 1998 where I’d been introducing my foster baboon infant – Gismo – to a troop of 17 Chacma baboons on a private reserve named Mosdene, something internal had stirred and woken up. Admittedly, it was a personal journey. One that life had blessed me in particular with, but it spoke of much more, offering a unique glimpse into our place within the rest of nature. More importantly, it revealed what we’d lost and how to retrieve it.” Karin Saks 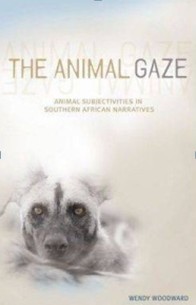 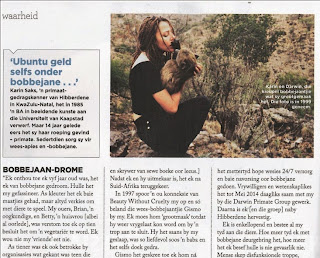 KARIN SAKS IS UNDERTAKING INVALUABLE WORK WITH REGARDS TO PRIMATE CONSERVATION AND WELFARE IN THE SOUTHERN CAPE, AS WELL AS ENVIRONMENTAL EDUCATION OUTREACH WORK. HER TIRELESS EFFORTS SHOULD BE COMMENDED, AND IMPORTANTLY, SUPPORTED.
KARIN’S DEDICATION TO THESE CREATURES IS BOTH REMARKABLE AND INSPIRING.
GARETH PATTERSON, AUTHOR, INDEPENDENT WILDLIFE RESEARCHER AND PUBLIC SPEAKER.

Praise for Saks’ work with baboons, as told in the book ‘Life with Darwin and Other Baboons’, Penguin Books:

…. “An important book, as it brings us nearer to the Baboons. We have lived as strangers to the animal world for so long now, and it is time to reconnect and respect a need to live, and that are natural to them. Instead of being strangers or even enemies, this book will help us to live together.” Irene van Lippe-Biesterfeld, Princess of The Netherlands. 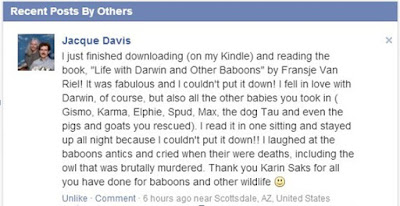 “Through fostering orphaned baboons and attempting to rehabilitate them back into the wild , Karin Saks brings fresh and moving perspectives to our knowledge of animal society . It’s impossible after reading it to view a community of animals in the same way again . Shape magazine , December
‘ Life with Darwin and Other Baboons is an evocative, deeply moving account of Karin Saks’s continued battle to protect southern Africa’s baboons, whose existence is threatened by continued persecution. The brave and indomitable Saks soldiers on in the face of burglaries, break-ups, belligerent farmers and the occasional deaths of her beloved baboons, triumphing over adversities that would have broken lesser women. Life with Darwin is a highly entertaining, well-researched read that should go a long way towards redressing man’s inhuman attitude towards this intelligent, highly evolved species.
Caroline Hurry, The Sunday Independent Newspaper
“An impressive account” Midi Magazine
” Life with Darwin and other baboons by Fransje van Riel (Penguin) will delight animal lovers – a tender observation of the work of Karin Saks in fostering and rehabilitating orphaned Chacma baboons ”
Otherwise , interview with Nancy Richards , SAFM Radio , S.A.
… intriguing, often hilarious but not without moments of poignancy…”