ABOUT BABOONS THAT RAID HUMAN PROPERTIES 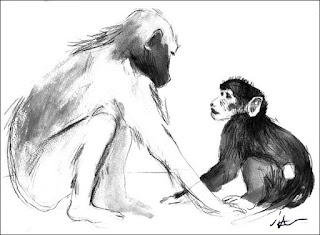 To understand why baboons enter human properties and raid, it is necessary to understand their behaviour. Firstly, this species is highly adaptive – they adapt to their environment accordingly. This means that when humans encroach on baboon territory to build houses, roads and erect electric pylons, the baboons that have been there for a very long time are forced to adapt to the changes. They were there first – they have been around for hundreds of years more than humans have. It is a common mistake to assume baboons came “down from the mountains” to “steal” from human properties; all too often residents complain: “they must go back to the mountain where they belong”.

Research has illustrated that baboons tend to sleep in high areas but forage in low ones where food sources are more nutritional and as humans tend to live in the low areas, we find ourselves sharing a territory with baboons.

It is natural behaviour for baboons to adapt to their changing environment even when that environment is a human one forced on them.

Why do baboons enter human properties?

The short answer is they are attracted onto human properties that have been erected in their territories because these are age old baboon foraging paths natural food sources have been replaced with tasty, special food they can't get anywhere else. Baboons will be attracted to exotic fruit trees, vegetable gardens, compost heaps, garbage,, horse/cow feed.... and will also be tempted to enter houses which display human foods.

How do I stop them from entering my property?

By removing or adapting the attraction that is bringing them there. See our educational material on how to do this.

Does shooting a troublesome baboon stop them from raiding?

No. This has never worked. The problem continues.

Why does this not stop them from raiding?

Usually it is the adult males that get shot and often it is the alpha male. Because this male has not been alone in making the decision but has acted on behalf of the whole troop, you would be shooting him simply for playing the role which is expected of him – that being to scout out a human property to check if there is available food for the WHOLE troop. When an alpha male gets shot, a new male will take his place and be expected by the troop to play the same role. If the troop chooses to raid, the new male will follow their lead and will scout out human properties to check on food sources. (See the video below).

Generally residents shoot a baboon they have been led to believe is a 'rogue”. The concept of a rogue baboon is based on misconceptions about baboon behaviour that have been passed down through the centuries. Residents may see one or two males on their properties on a regular bases and are likely to assume these are “rogue males” who have no troop. This is rarely the case.

Wild Primates – vervet monkeys and baboons eat according to a strict hierarchy – those at the top of the hierarchy get first access to favourite foods. When you have a fruit tree in season on your property and a baboon or monkey troop arrives to eat, the top members of the hierarchy will eat the fruit while those on the lower end will be left to wait. It is all too easy to assume the top members are trouble makers when you see them eating your fruit tree.
While the top hierarchy may be eating your fruit tree, the lower members may go off separately to find food elsewhere where the others can't see them.

In Nature's Valley, a baboon was allegedly stuck in a house for 6 hours and then shot (illegally as apparently occurs annually). The probably explanation for this baboon choosing to stay inside was not merely that there were hostile people waiting outside for him but also higher ranking baboons from his troop that would punish him for entering a favourite food spot.

BABOONS DO LEAVE THEIR TROOPS - TEMPORARILY - TO SEEK FOOD.

What happens when you shoot a whole troop:

When you shoot a whole troop, you leave a vacuum for a new troop to move into that territory. If residents continue to attract baboons and monkeys with exotic foods or human junk food, the new troop will eventually start to raid these too.

Giving Your Power Away:

Feeding by hand causes enormous problems as it shows the primates that you are being submissive. In a wild primate troop, one only gives up your food to those lower than you on the hierarchy – feeding these animals by hand, gives the message that you are giving away your power. This results in them expecting food from you in the future. Wild primates do not feed each other. Not even mothers give their infants food other than the milk they have to offer.
VIDEO BELOW SHOWS HOW A BABOON TROOP IN NATURE'S VALLEY PLANS ON ENTERING TO FIND FOOD:

One of the common misconceptions about baboons is that they are far more dangerous than they are in practice. One reason is that people believe them to be predators who prey on other animals. We have found along the Garden Route that baboons will choose to eat vegetable matter over any flesh if it is available which in this part of the world, it definitely is.
In areas where baboons have adapted to eating meat it is because they have been pressurised by their environment – for example, a baboon may kill a baby gazelle in areas where vegetable food sources are scarce because it is their natural behaviour to adapt to the food source that is available there. It is therefore incorrect to assume that this largely vegetarian species is a predator. They certainly do not eat humans and usually have no reason to attack them unless severely provoked/cornered. In areas where they are forced to desperately compete with people for food, and when humans have lost their power by feeding the baboons by hand, a baboon may become more aggressive than normal to obtain food (for example in the Cape Peninsula). Usually this is merely a threat without any intent to physically harm. Please read our information about how to deal with these situations in a way that brings no harm to yourself or the baboon.
on August 06, 2011