Comments on the new draft Policy on “DAMAGE CAUSING ANIMALS” 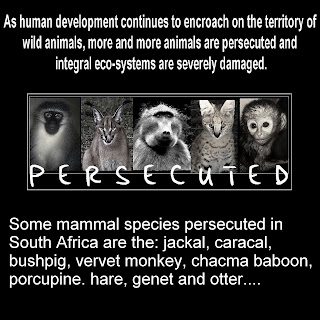 The new draft policy makes it legal for DCAs to be hunted with permits allowing the use of poison, bait, traps, leghold devices, dog packs, etc. Lures and bait are allowed, and it is acceptable to hunt from a motor vehicle, using spotlights at night.

OBJECTIONS:
There is no consideration whatsoever to the welfare of “Damage Causing Animals”. Instead, there are blatant attempts to legalise exceptionally cruel, inhumane methods that place the control of wildlife firmly in the hands of farmers/forestors and other business driven individuals whose main priority is financial gain, regardless of the expense done to the environment/biodiversity.

As a result, this draft policy reads as a thinly disguised document to protect the rights of those who place financial interest above the health of the environment. Conservation officials are generally understood to be protectors of our environment, not protectors of certain sectors of society that seek to destroy it. The draft illustrates once again to the world that South African government conservation is in a bad state of affairs in terms of its policies and welfare of wildlife. This view is likely to impact negatively on tourism in South Africa, as informed international eco-tourists are increasing only wanting to visit places where compassionate conservation exists.

Legislation that has been described as “applicable” is often outdated; some of the acts mentioned, are forty to eighty years old. The outdated Animal Protection Act does little if anything to protect wild animals and seems to be referred to for one reason only – as a token act to cover up what is truly a document that upholds inhumane methods to deter so called “damage causing animals”.

There is no understanding that poor farming practices are responsible for most of the conflict between humans and DCA's, There is no realization that outdated legislation continues to allow indiscriminate lethal methods of deterring DCA's or that legislation is widely open to abuse and misuse. By legalising lethal methods to deter wildlife, farmers and others are given the clear message that killing inhumanely and indiscriminately is entirely acceptable. This message will perpetuate the present climate of destroying our wild heritage and will continue to deter tourists who want to visit ethical eco destinations from visiting.

As a result, our wildlife populations continue to dwindle, wildlife social structures continue to become dysfunctional, biodiversity continues to be destroyed and all for the sake of short term financial gain.

Re: Chapter 2 (4) (a) ((1) bb)
The option to allow trapping wild animals for sale to research laboratories has always been illegal due to their CITES listing and consequential protected status as well as the restricted activity NEMBA definitions.
The above reference to allowing wild caught animals to be sold or donated to captive breeding or research facilities is another reference that is (added in 'again') again highly likely to impact negatively on the environment and the tourist industry that presently supports South Africa as a wildlife (friendly) take out 'friendly' destination. Potential eco-tourists could ethically prefer, for example, to visit Kenya where compassionate conservation exists .

As someone who has some experience with members of the public who profess to have problems with DCA's, it has become clear to me over time that members of the public commonly regard legislation as a barometer to justify lethal methods used against DCA's. The public look to our Nature Conservation organisations for direction. Simultaneously, Nature Conservation officials seem to be under the impression that these same laws exist because the public wants them.

SOLUTIONS:
Non -lethal methods to deter all DCA's should be widely encouraged. A climate that fosters a reverence and appreciation for our environment and its fauna and flora should be adopted to educate present and future generations who will in turn protect the environment long term. This will ensure our wild heritage is protected for future generations and for the tourists that support this country. Legislation that perpetuates the use of lethal methods to deter DCA's needs to be removed entirely. Only then will there be any chance of us stopping the ongoing destruction caused to biodiversity.
on January 12, 2011