Baboons in Africa - Misunderstanding their Language 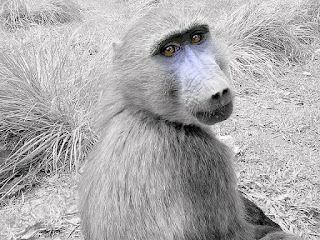 A Researcher working in Uganda contacted me some time ago to ask if I could help her understand what was happening to the villagers in her area; a group of the women were being "sexually harassed" by a troop of baboons. These "attacks" occurred when the women headed towards the river to do their daily clothes washing.


I asked if anyone had threatened the baboons, or perhaps walked too close to an infant? She answered that the baboon threats were totally unprovoked by the women and they feared they would be "raped".

Baboons do not rape or sexually harass human women.

Bewildered by this story, I questioned the researcher further.

"Were there any men around when these women were threatened by the baboons?"

The men were threatening the baboons to "protect" the women, the reason being fear.

The behaviour described above is a clear cut case of redirected aggression. The baboons were threatening the women because -  in their eyes -  women are "weaker" hence it is safer to threaten a woman who is connected to a hostile man than threaten the man himself.

This is common behaviour among wild primates. If an adult human man attacks -  or strongly threatens -  a male baboon who feels he has to respond, and there happens to be a woman close by, the baboon will threaten the woman.

As far as baboons sexually harassing humans is concerned, it appears that a certain amount of projection was involved in understanding the behaviour of these baboons.

The solution to a problem like this would be for the men and women to ignore the baboons, act passively and be respectful of their troop and territory.

To harmoniously co-exist with wild primates, it requires us to practice tolerance and patience. We need to take the time to understand their language so we can correctly interpret the behaviour that scares us.
on February 01, 2015