Another Monkey Dies in Nature's Valley.Nov. 09 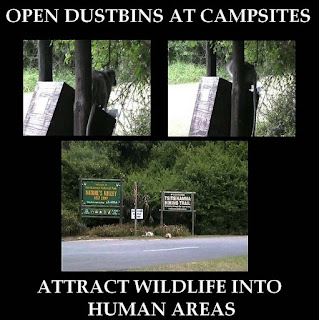 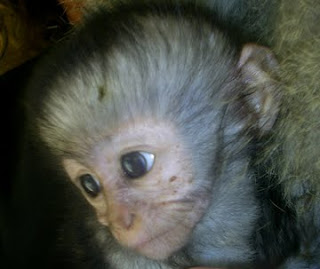 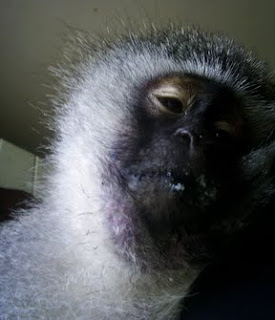 On the last day of November, I received a call from the Nature’s Valley camp site to rescue an adult female monkey who appeared to be “very sick”, unable to walk and had an infant clinging to her. The mother had suffered severe trauma; her neck, head and chest were a deep purple. Her face was distorted due to massive swelling and her eyes stared, signifying concussion. The most likely reason for the injury was that someone had hit her with such force that the intent no doubt was to kill. Reluctant to leave his mother, the infant attempted repeatedly to wake her up. In response she’d try to pull him off her; the pain being too difficult to bear. She needed all the energy she had; we took over the nurturing of the infant and the other monkeys have been helping to make him feel welcome.

Although we did everything to try and save the mother over the next few days, it transpired she had suffered internal injuries that made survival impossible and died.

Open dustbins and kitchens are responsible for attracting monkeys and baboons into the camp site. Once there, tourists feeding them by hand, and eating in front of them, invites these primates to help themselves to any food around. Primate proof dustbins, signage placed in strategic places to educate visitors, a primate proof kitchen area and good waste management will go a long way to solve the animal/human conflict.

The vervet monkey troop in Nature’s Valley has been living off the refuse site and camp site for some years as bad waste management continues.


Thankyou to Jemima from Sanparks for her concern for the injured mother and her baby.

For information on co-existence between humans and wild primates, LOOKK UNDER OUR MENU - FOR RESIDENTS -
on December 04, 2009