SNARES AND THE HORRIFIC CONSEQUENCES. 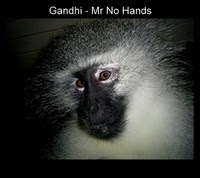 September 2008: Jack, Nakedi, Zambi and Gandhi aka Mr No Hands.

In spite of low predator populations, our baboons and monkeys are run over by cars, killed by dogs, caught in snares, poisoned, caught for biomedical research laboratories, the pet industry and muthi (traditional medicine), electrocuted on pylons, and shot or injured by pellet guns.

For over a year, the Animal Welfare in Knysna has been receiving reports of single monkeys without limbs who have been forced to rely on the kindness of certain humans for protection and food. These monkeys have all been snared. Some have died from their wounds.

Gandhi - an adult male - was first seen surviving with his troop but then had to resort to living alone making his destiny exceptionally precarious as a single monkey - especially one without hands - is vulnerable to predators.
Some residents were kind enough to accept and tolerate his reliance on them, allowing him access onto human properties for some time. But recently a few began to threaten to shoot him , forcing us to find a way to save his life.

When he arrived here, the other monkeys greeted him enthusiastically. Because he has a particularly passive gentle nature, I have called him Gandhi. This calm, wise male is unlikely to have presented a threat to anyone. Unfortunately the myths that exist about these primates remain one of their biggest threats to survival. With more tolerance and understanding it is possible to co-exist harmoniously. These monkeys increasingly face the difficulty of living next to ongoing development that encroached on their habitat and are faced daily with the risk of being electrocuted, snared, run over, killed by dogs, shot or poisoned.

A BIG THANK YOU TO THE ANIMAL WELFARE IN KNYSNA for all the work they do to help our wildlife as well as cope with the numerous domestic animals that rely on them to survive.

This photo was sent to me last year after Gandhi had been seen in the Knysna area. Here he clearly has adapted - during the initial stages of his recovery - to using the power lines to make his way across the foliage. 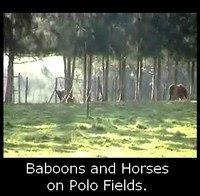 The video clip shows his arrival where all the monkeys first greeted, then attempted to groom him through the wire of the box he had been transported in on the back of the van.