Bipod, a female vervet monkey, missing one arm and one leg manages to keep up with her troop. Our trail cameras have captured a number of videos of her interacting with members from her group and the samango monkeys that share their territory. The following trail camera footage documents some of Bipod's adventures.

Bipod also stars in the video below which shows the relationship between a vervet troop (Bipod's group) and a samango monkey troop.


Why do we see so many vervet monkeys and baboons that are missing one or two limbs?

The next time someone says: "there are too many monkeys because their predators have been eradicated", ask yourself if that is really true.

Are there really"too many monkeys"? The health of a troop is best evaluated by the age/sex ratio as opposed to the number of individuals in it.

Are there many infants and babies giving the impression that the troop is "too big" (a large percentage of the babies don't make it to adulthood).

To what extent is the impression of "too many monkeys" a human-centric one that denies our encroachment and destruction of their habitat?

Monkeys that share human spaces (hostile land) are shot at, poisoned, killed by dogs, electrocuted, run over by cars and captured for muti. This explains the presence of numerous monkeys and baboons in South Africa, living with one or two limbs, that bravely survive, albeit with much difficulty. 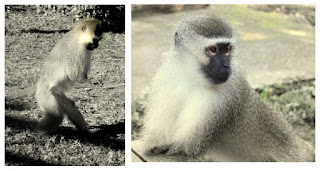 Monkeys Being Electrocuted Along the Garden Route  https://darwinprimategroup.blogspot.com/2008/06/monkeys-being-electrocuted-along-garden.html

Samango Monkey missing arms after being electrocuted at the Vervet Monkey Foundation. https://www.dailymail.co.uk/news/article-6424801/Primate-arms-amputated-electrocuted-faulty-power-line.html
on November 02, 2018