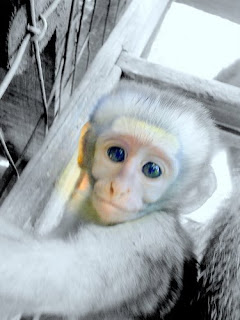 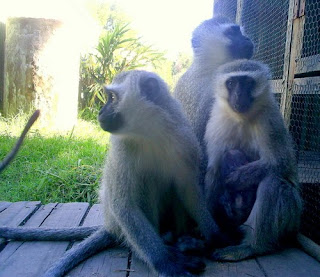 Harriet, Mr No hands and Jack - top female, male and beta male, bonding with newcomers inside the eclosure while long term residents freely roam in the indigenous forest. 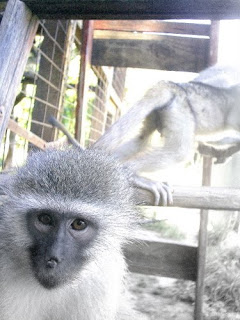 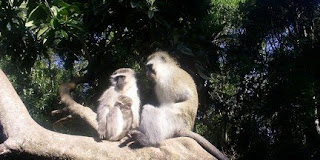 
Some nine years ago, when I first moved to the Garden Route, after establishing a baboon sanctuary in the Magaliesberg, I decided not to continue rehabilitating and rescuing non-human indigenous primates. My reasons had much to do with what had occurred on the sanctuary, the one we'd named "Imfene" which was based at the foot of the Magaliesberg Mountain. To explain it all I would have to digress but if you are curious about all the roads that led to this decision, it can be found in Fransje van Riel's book; Life With Darwin which was published in 2003 by Penguin Publishers.

To summarise the copious obstacles facing those who takes on the rehab or rescue of vervet monkeys and baboons is almost impossible. Those that do, are faced with legislation that seeks to persecute these species, propaganda that serves to perpetuate age-old myths about their behaviour and status as "problem" animals in relation to the humans who have robbed them of their natural habitat and the right to live freely, and the chronic consequences of loving non-human animals that face death on a daily basis.

Back in 2000, I had no intention of risking this kind of love and pain again.

To deter this nightmare, I remained faithful to a safer plan; working towards a harmonious co-existence between humans and non-human primates - finding solutions, educating and fighting our unacceptable laws. This work continued until residents with injured and orphaned baboons and monkeys began to seek me out; there are no vervet monkey sanctuaries or rehab centres in the Western Cape.

There was no other solution but to euthanase those in need.

And while there is one baboon sanctuary in this province, it is some hours away from the Garden Route, making it far easier to find a lethal solution to the countless orphans that are the consequence of farmers shooting mothers.

Once again, I felt compelled to do something - faced with an infant orphaned primate who has no future other than death, the choices are few. And so I founded the Darwin Primate Group that seeks to find solutions to bring harmonious co-existence between non-human and human primates and rescues and rehabilitates vervet monkeys.

With the limitations of living on rented land, we went ahead, taking in any infant orphans and injured adults that came our way. My method of rehab has been to integrate all the monkeys that get brought here so that they are bonded and can freely roam in the wild indigenous forest that surrounds our home. Today most of these individuals are bonded, have learnt many wild lessons about foraging for natural foods and the threat of predators. Sometime newcomers take one month to integrate and become free, others take six months. The goal always is to work towards total freedom in the wild.

Wild vervet monkeys have come and gone, as have many single transient males. Presently, we have a wild adult male called Kong who has joined our rehab group. Unlike some of the other transient males he has shown a calm, submissive disposition and seems to slowly be working his way into the group, using the most beneficial monkey manners possible.
And so the saga continues....
on February 21, 2010