MOVING FROM AN ANTHROPOCENTRIC WORLD VIEW TO A BIO-CENTRIC ONE.
Karin Saks. 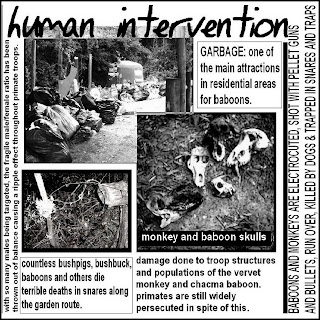 "If Homo sapiens disappeared, the event would go virtually unnoticed by the vast majority of Earth’s life forms. As hominids, we dwell at the outermost fringes of important ecological processes such as photosynthesis and the conversion of biomass into usable nutrients." Christopher Manes (Nature and Silence 1996:24) The variety of living things all act together to make the web of life work. Over time this variety has been dangerously reduced by one species - humans. The consequences of this ensure that the present destructive events will continue until it is too late; unless we bring about serious change. All living things are necessary for Biodiversity - sun, water, plants, insects, reptiles, mammals, soil, fungi and bacteria are some examples of these life forms. The dependency of life forms on each other, the amount of species in existence, the genetic wealth within each and the natural areas where they occur are other elements necessary for biodiversity. Humans too are necessary and part of this web. Some of us see humans as above all other species, as a species that has the god given right - or self imposed right - to control and manipulate the rest of nature, while some of us see humans as having a role no more important in the big scheme of life than carrying bacteria in the human armpit as pointed out by Michael Tobias. “From the biosphere’s perspective, the whole point of Homo sapiens is their armpits, aswarm with 24.1 billion bacteria” (vii).Michael Tobias (in the introduction to the collection Deep Ecology) But whichever way we look at it, none of us can deny that the human population growth is way out of balance in relation to other species and this is the primary fact responsible for breaking down the web of life. If humans did not interfere in nature, the balance could be restored, because natural laws will ensure sustainable population densities. Natural forces will often bring balance back by causing the offending organisms to become extinct. Those who support the concept of sustainable use of natural resources, consider all species manageable to sustain the ongoing population increase of humans. The problem with this theory - and why it does not and never has - worked is that the most destructive and over populated species - the biggest consumers - are left out of the equation; In short, other species are "culled" so that humans can continue to over-populate, encroach on and destroy the environment and those who depend on it. Unless our own species is viewed in the same light as all others, long term conservation based on the principles of sustainable use, is unrealistic. For many of us, the answer lies in transforming an overwhelming anthropocentric (human based) view of the world into one that is bio-centric (where we are seen as one species amongst all others). If we don't change our destructive behaviour patterns, we will be unable to avoid a total end to our planet. This is why; it is entirely objective and realistic to refuse to embrace the culling of animals while humans ignore their own role as an over-populated species that by far destroys more than any other. We do not simply oppose the culling of animals - this needs to be seen in the context of human populations; how can we morally and objectively justify the decision to cull other species until we have made the human population explosion a priority to be viewed as the most important factor contributing to environmental damage. If humans have rights, how can animals not when you consider the above? By the same token if animals are granted no rights, then the most over populated species - humans - would have no right to rights either, provided we were able to look at the big picture without getting sentimentally swayed by our own self-imposed self importance (one which incidentally, the rest of nature does not agree with for if it did, there would be no environmental degradation). While animal rightists are accused of being sentimental, emotional and unrealistic, the fact is that the concept of sustainable use is exactly that - it is human based at the expense of all other life forms and in being so is a concept that appears to work in theory but has yet to do so in practice.
on August 08, 2009