The frustration of residents was palpable. Someone had a long stick, another was screaming "voetsak" - over and over. Both primate species seemed uncommonly anxious. 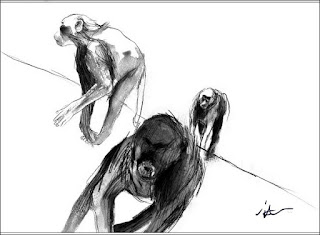 When verbally attacked, the troop melted into the bush, then as people seemed to move away, just as swiftly arrived back on the scene. I watched countless hotdogs and buns make their way off into the forest, clutched strongly by small black hands while perceptive eyes darted around looking for any obstacle. Every black plastic bag had been shredded, every container dissected. Hadn't anyone from the muncipality considered how much extra work this would bring them? Had they thought of ways to help how this affected both the people and the wild baboons? Age old misconceptions about the nature of baboons has seen them shot - again and again - in the past, but this method of "control" has never worked to deter them for long. Recent baboon management programs have shown success using non-lethal methods like baboon monitors, with the Cape Peninsula illustrating much research on this area.

Implementing a good waste management system is believed to bring a great reduction in the amount of raids done.

Having watched one monkey troop and one baboon troop rely regularly on the Nature's Valley dump - as shown in this video, there is no question that this needs to be addressed by firstly implementing a workable waste management program. I looked back at the baboons; those lower down on the hierarchy monopolised the junk food and had by now displaced the top individuals. Screams about who had taken hold of who's food echoed loudly. It all looked so dramatic.

But from where we sat, this stressful situation seemed easily resolved.