Finding Yourself with An Orphaned baboon or monkey.

Why can't I release an orphan myself?

There are far, far more failed rehabilitation attempts that have been documented than successful ones. 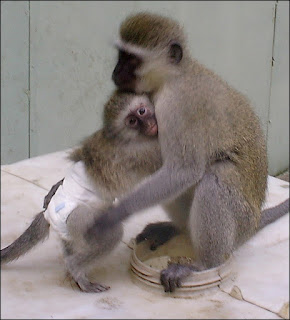 INFANTICIDE: WHEN INFANTS GET KILLED.

Releasing an orphan is likely to end in infanticide unless specific criteria are followed. Please don't ever attempt this. The safest option is for an orphan to be integrated slowly and carefully into a troop that has been formulated by a rehabilitation centre. If you consider the complex troop structure of a wild group where blood relations are likely to define the closest alliances and matrilines are arranged according to a hierarchy, it is possible to understand to some extent, how difficult it is to integrate one unrelated primate into a wild troop. One unrelated primate without family or other alliances in a natural troop where rank is important to your ability to make social bonds, have access to the best food and higher ranking animals, is unlikely to be accepted without an enormous amount of time and effort spent on the rehabilitator's part.

Amongst baboons in the Cape, living close to human habitats, infanticide is common when new males move into a troop and kill. There are varying opinions about infanticide in vervets, but it is thought to sometimes occur in high stress human areas and is unlikely to exist in troops not pressurised by human intervention. Personally - never having witnessed infanticide in vervets, I tend to think that it does occur but because vervets are more difficult to observe than baboons, it is seen less regularly. (Observers report finding infant corpses without having witnessed an actual infanticide event). This kind of behaviour is likely magnified - if not evoked at times- by our interference - increasing human development.

Releasing an orphan into a troop without any monitoring of the dynamics, psychology, history of the whole group and each relationship to the newcomer, is akin to signing the death warrant for the orphan you are wanting to help.
on May 13, 2008