This concept is highly controversial and has been adopted by certain organisations in an attempt to confront the very real danger faced by our vervet populations due to human intervention. Hopefully residents who consider this option, will do so as a last resort when all else fails.
I cannot underestimate how important it is that if one chooses to use a feeding station, it has to be done responsibly, taking all relevant aspects into account (see below)

Vervets are seasonal eaters; they go where trees are in season at certain times of the year. When these plants are not in season, they move on to places where food is more available.
Human homes that have exotic fruits, compost heaps, vegetable gardens etc. will be viewed by vervets in a "seasonal" way too. If the food source is removed, it is pretty much like an indigenous plant that has gone out of season and the vervets will then have reason to move on.

Baboons and monkeys have foraging routes. If your home happens to be situated along their daily foraging route, its attractions may well be included in their daily diet along with the wild indigenous foods that they forage for where humans are not living.

Some people report how often they see monkeys or baboons during weekends or holidays - as if these prmates know what times of year and week are more profitable as far as getting food from humans is concerned. In an area where I live, which is a high tourist area, it certainly does seem that camp sites - for example- are included as seasonal feeding sites amongst non-human primates, in much the same way that seasonal indigenous fruits/seeds and grasses are. 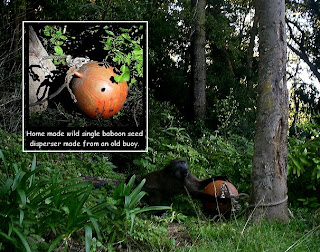 The logic behind the concept of feeding stations is that:

A feeding station needs to created in a way that doesn't contribute to unhealthy primate populations or increased birth rates.
Unless humans are prepared to do away with all unnatural food sources that they provide for baboons and monkeys who share the ame territory, then it makes sense that establishing a feeding station will simply replace the unnatural food already on the property.

1. Can we not simply ask all humans to make sure they have no non-natural food sources on their properties, so that monkeys and baboons will be encouraged to only survive on wild foods?

The reality so far has proved that most people are unwilling to adapt their lifestyles to accommodate wild animal neighbors. As long as exotic fruit trees, vegetable gardens, compost heaps, garbage bags and open windows are part of the landscape, non-human primates will consider human properties as areas along their natural foraging route and help themselves to these food sources.

They are unlikely to view human habitats as separate from their territories considering that we have encroached on what was once their territory alone.

2. Won't feeding sites create an increase in the birth rate - primates who eat from garbage dumps have been known to increase birth rates?

- The good thing about a feeding site is that the food offered is controlled whereas at a garbage dump, it is not. Feeding stations are not a substitute but rather they supplement the diet when resources are low. Observations have shown that monkeys tend to feed at these sites only when necessary and do not become dependant on them as a substitute to wild food.

3.Will they not attract the monkeys into human areas?

- The goal of a feeding site is to attract the monkeys who are already living in human areas to a place where they are safe. If they have the choice to feed from a safe feeding station rather than on a property where the humans are very hostile, they will choose the feeding station and by doing so lessen the chances of getting hurt.

The information about feeding sites has been formulated based on long term research done by various primate naturalists.

When considering this option, it is vital to go about it in a responsible manner that does not associate humans feeding the monkeys. Putting out food for wild monkeys can be easily done when they are not around and are not hiding in trees where they can't be seen.

If residents are unable to follow this - and the temptation to bond with monkeys using food is too great, this method is best not used, for it may impact negatively on the perceived "problem" situation.

When you hand a favourite fruit - for example - to a baboon or monkey, you are suggesting a subordinate position for in a wild troop only those at the top of the hierarchy have first access to favourite foods. Once you have given your power away, the monkey or baboon may begin to push boundaries, expecting more, and this is when people panic and react impulsively.

Please don't initiate this process with any wild primate, by feeding by hand.

(An extensive knowledge of baboon or monkey language would be required to gain back your power and enlist the primate's respect once again.)

BABOONS ON THE CAPE PENINSULA:

The baboon populations on the Cape Peninsula are an example of baboons that have been forced into close contact with humans by development that has cut them off from other areas. Their natural resources are low and they have adapted to getting food from human properties.

All too often this population - because of the studies done there - is used to understand other baboon populations where circumstances are different.

The Cape Peninsula baboons are a good example of what occurs when development increases on natural habitats to the extent it cuts off wild populations from moving away.


It is necessary for those of us who live in areas where this situation is still possible to confront, to understand the Cape Peninsula Baboon/human conflict and the damage caused, so that we can prevent our baboon populations from being forced into the same problems.