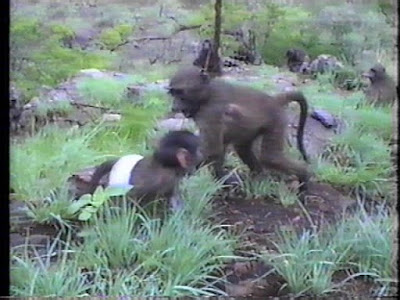 Above: Darwin, an orphan baby baboon accepted by the wild troop that would come past our home in Broederstroom.

Our rehabilitation centres in South Africa have a backlog of primates where hundreds of primates remain in captivity for years. Without protective legislation and a diminishing habitat, full rehabilitation is fraught with risk.
The main concerns of the D.P.G are to work towards long term changes that will provide a safer environment for our primates. Rescue and rehabilitation is an aspect of this but until better circumstances exist for our wildlife, rehabilitation remains a band aid for a much deeper problem.
The following article was written after I'd rehabilitated Gismo - an orphan - back into the wild in 1998. At the time, the only options that were presented to me by the rehabilitation centre where he'd come from, were to take him to the centre once the fostering period was over. This would have ensured he would be put together with other babies and would remain there for years.
Some baboons have been there for over twenty years living in an enclosure. Unable to accept this captivity option, I looked elsewhere, determined to find a way to return him back into the wild. The story below was published after the release. Not having had much experience at the time, the success of this rehabilitation is something Gismo and I owe entirely to the baboon troop who accepted him. (One rehabilitator who I had hoped to be able to ask about things, had been called away to work, leaving Gismo and I to find our own way.) I say this to illustrate the immense potential of this species to communicate across species barriers and direct the manner in which this release would go. It gave me an insight into baboon life that remains an exceptionally precious memory to this day.

I'd had no previous rehabilitation experience, had had no contact at all with the owner of the rehab centre who had passed him on to me, and had never visited this centre to see what they do. By following the troop's lead - the communication they made perfectly clear, every step of the release led to what was to become a life of freedom for Gismo. (This was monitored for a year after the release.)