Video of babies on 3rd May08. Intro to the group. 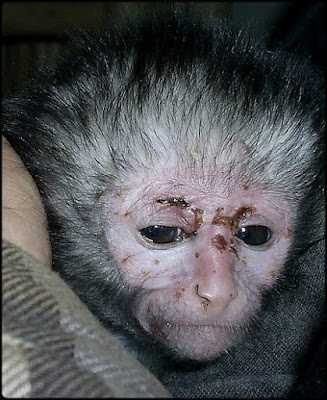 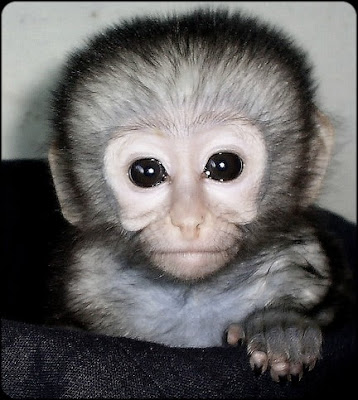 Diddy Kong soon after he arrived 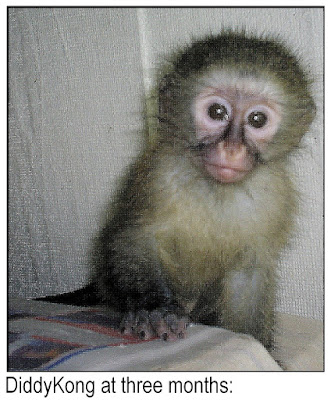 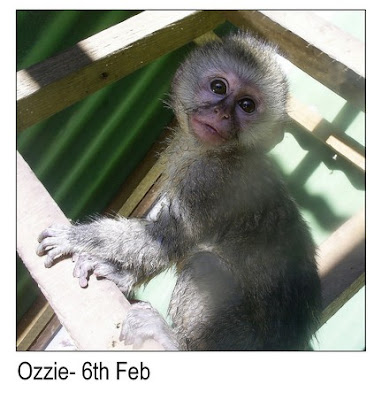 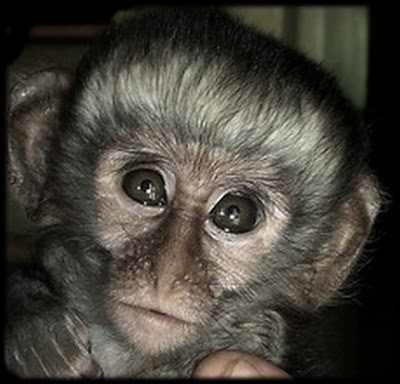 Mango when he arrived - a different looking infant!
Between November 2007 and January 2008, six orphaned infants were brought to me to join the D.P.G troop. There are signs of a definite hierarchy amongst them; who has access to favourite foods first, who gets blamed when there is conflict and re-directed aggression takes place and who has the most impact on influencing troop behaviour.
Interestingly this particular group have a hierarchy that is based on who arrived first as well as size.

Diddy Kong, a young male of about 7 months, leads. He has a calm, accepting and friendly disposition, relying on his closest ally - Mango - to sort out most disputes for him. He is the most playful and the most adventurous.

Although Ozzie - the only female - was next to arrive, she is closest to Kennedy who is number four in the male group. She and Kennedy groom each other, defend each other and spend most of their time together. While Kennedy does not like people wearing sunglasses, Ozzie is completely fascinated by them and will stare at her reflection in them for ages, touching the lenses.

Ozzie was barely alive when she arrived. She'd been alone in a bush for at least two days when a couple out walking heard her cries. They found no sign at all of her mother or troop. Today she is healthy and happy but still expresses a fair amount of insecurity which appears to be related to her trauma at birth time.

Mango looked different from the start. His face was dark, his eyebrows prominent and his fur was yellow, but as he has grown, he looks more and more like a vervet. He is the most agile in the group, sometimes with interesting spider like movements, he moves through trees exceptionally quickly.

Although Diddy Kong is 'baby leader", he tends to cling to Mango for support when he is insecure rather than the other way round. These two are always the first to try anything new. And when a favourite food is too scarce to go round, Mango will ensure that only he and Diddy are the only two allowed to eat.

Koko is the next male in the heierarchy. Like the others, he has distinct characteristics that are his alone - both physically and psychologically. His fur is pale, his limbs are long and his eyes and ears big in relation to his head. He tends to stand and bob if there is potential danger, long before anyone else does.
Kennedy and Nakedi are both confiscated pets. Both of them took about two months to settle in, expressing some trauma at being taken away from their simian families and perhaps their human families. It is hard to know what their history is but both exhibted similar psychological traits. They're both fully integrated into the troop today. Kennedy acts as Ozzie's partner.
Nakedi is the youngest and smallest. He still has a fair amount of baby fur. When he first arrived, the others did their best making him welcome by cuddling him and paying him a lot of interest but for some weeks although he accepted their gestures he seemed a bit scared of monkeys and preferred the company of our companion cat.
After a month he began to play with the others and seems completely integrated today.