A very special monkey who I had the privelege of knowing for short while. 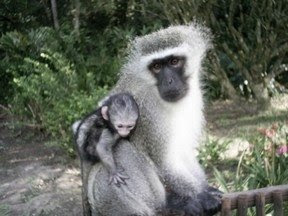 OSCAR AFTER BEING RELEASED, ACTED AS PROTECTOR THE BABY ORPHANED VERVETS HERE - IN THIS PICTURE: OSCAR WITH OZZIE ON HIS BACK.

For those who have asked:

Every monkey or baboon that comes here is treated as an individual case.
Wherever possible, a monkey or baboon needs to be with their own kind as soon as possible. But with these social animals, when it is not possible, it is unacceptable to leave an injured monkey for a long period entirely alone - this will lead to mental trauma.
Orphaned babies need nurturing and if left alone at this crucial development stage for long periods, will likely be traumatized for life.
In this case, where Oscar was an adult wild monkey male, I was amazed how once he had come round from the shock, he seemed completely accepting to go with what was required for his full recovery and this relied on as little stress as possible.
Putting him in a cage was unacceptable to him. If I had needed to take him to a vet, I am sure he would not have made it past the first day for being confined in a veterinary surgeon's practice with the smells and sights of predators would have added enormous stress.

The necessary unconfrontational body language was used to calm him during his first days and once he was over the shock and secure, he clearly asked to be groomed and touched, needing social contact.

Once he was well enough to climb, I monitored his progress in the forest but he never fully regained the movement in his back leg. However within a couple of months he was extremely mobile in the trees. He had nerve damage and at first had no movement from the hip down. After being hit by the car, he had stayed in the middle of the road, his head upright and his eyes terrified, watching cars whizzing past him while unable to move.
His recovery was long. But he did recover and go back to the wild as an agile, strong male, albeit with one slow leg.
While he had formed a relationship with us, he was untrusting of any strange human that came onto the property and would warn us in much the same way as he did when seeing a strange predator.
The balance between offering him the social needs he required while ensuring he did not become too "humanised", had been achieved.
After saying that, most species require as little human contact as possible when injured and with primates the wrong body language would not be beneficial to their recovery either.
Anyone coming across an injured or orphaned monkeys or baboon can help by contacting a respectable rehab center or experienced primate person if at all possible.

And the baby baboon that is shown in this video:

He is "Kamu" - a baby orphaned on a farm in the Western Cape where his mother was first shot then beaten to death while he clung to her.
He now is with other juveniles going through the rehabilitation process.
on April 20, 2008