Farmers vs Wildlife - The Crags

The Crags is an agricultural area bordering the Tsitsikamma National Park. There are no fences preventing wildlife from wandering on to agricultural land where they are vulnerable to dying tortuous deaths in poachers traps, being shot by local farmers and residents or being electrocuted on pylons.

Wild primates are attracted by compost heaps, garbage, vegetable gardens, farmer's crops and horse/cow feed amongst other attractions and The Crags has an abundance of these attractions displayed by avocado/tomato and dairy farmers. 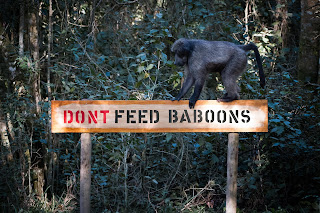 ABOVE: ENTRANCE TO THE DARWIN PRIMATE GROUP - THE CRAGS 2012